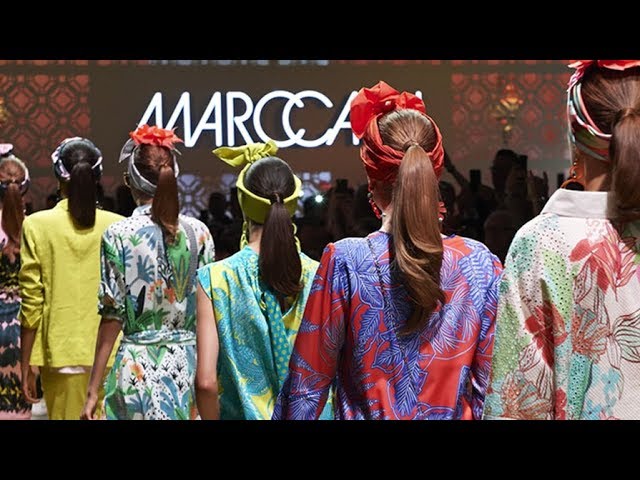 For the second season running, La Biosthétique Paris is the official Mercedes Benz Fashion Week beauty partner, and thus also responsible for the hairstyles and make-up concepts at Marc Cain.

3 July 2018 in Berlin. The Mercedes Benz Fashion Week is gathering speed, and Berlin is receiving its guests from the fashion world with dreamy summer weather. Whilst the first shows are already being held in the official Fashion Week location, the E-Werk in the Berlin-Mitte neighbourhood, at Berlin's Westhafen (Western Harbour) between the Moabit and Charlottenburg neighbourhoods countless black limousines are packed bumper to bumper around the canal to get to the main entrance of the WECC - Westhafen Event and Convention Center.

Traditionally, on the Tuesday evening of Fashion Week, the well-established German company Marc Cain, which was founded in 1973, presents its new collection, and this always means a large number of celebrities crowding around the catwalk. As expected, numerous photographers and television teams are crowding in front of the entrance to the Marc Cain Fashion Show, which is kept in the "Le Riad" style of the new collection, hoping to catch a photo of one of the celebrities.

They are not disappointed. Whilst the sun transforms the Westhafen canal in the background into a sparkling sea of stars, the real stars come and go on the red carpet as they exit their limousines. This evening, the Marc Cain label, which is particularly popular with celebrities and influencers, is welcoming Veronica Ferres, Annemarie Carpendale, Joy Denalane, Bettina Zimmermann, Marie Bäumer, Liv Lisa Fries, Stefanie Giesinger and the band, The Boss Hoss in the front row. They are joined by representatives of the most important magazines such as Beatrice Graf ("Vogue") and Marie von den Benken ("Stern"/"Nylon").

An oriental wind is blowing through the Westhafen event location: Marc Cain takes his audiences on a trip through 1960s Marrakesh, the hotspot of that era's jet set. Featuring sophisticated patterns, strong colour signals and bright pastel shades, with its pot-pourri of different cultures and ethnicities and its feminine, flowing combinations of traditional African and modern influences, the collection wins over both fashion audiences and VIPs. Marc Cain also offers big star potential on the catwalk: International supermodel Isabeli Fontana is opening The "Le Riad" fashion show. The 19-year-old Talia Graf is getting a lot of attention from the press, too. This evening, the niece of German tennis legend Steffi Graf is celebrating her catwalk début for Marc Cain in Berlin.

Unruffled by the flash-happy photographers outside the location, the 40-person La Biosthétique Paris team (including Alexander von Trentini, Christian Fritzenwanker, Markus Loboda, Kathrin Zenk, Tim Schädlich, Marion Ganse, Serdal Bengi, Yvonne Wengler, Annett Esser and Maja Botic) are not only styling the models backstage, which Marc Cain is sending on the runway for the new spring/summer 2019 collection, but also the celebrity guests such as Stefanie Giesinger, Marie Bäumer and Dutch model Marvy Rieder in Salon Goerner & Company. Hours before the Marc Cain show, the teams managed by International Creative Director Alexander Dinter and International Make-up Artist Steffen Zoll, transferred the charm and magic of the Marrakesh-inspired new Marc Cain collection to the hair and make-up look of the models.

"Le Riad means turbans and headbands. This also influenced the hairstyles. That's why we worked with classic ponytails tied in the middle of the back of the head. These were neatly and classically blow-dried, tied with a ponytail band and "hidden" under the hair. The turbans were then placed on top of this. We opted for a classic chignon for shorter hair. For the styling we used our new product "Light Defining Cream" that controls the hair without weighing it down. The result is a casual and conditioned look that perfectly reflects the Marrakesh motto".

"For the make-up the skin has to look transparent and sandy, like the sun meeting a sand dune. With this in mind, we used "Daily Highlighter" and created expressive sphinx eyes with eyeliner. Lips were emphasised with "Nougat Cream" gloss.

As the La Biosthétique Managing Directors Felix and Jean-Marc Weiser put it: La Biosthétique Paris is happy and proud to have made a small contribution to the great success of the new Marc Cain collection.