The La Biosthétique team is transforming the magnificent “Flowers never fail you” collection of Talbot and Runhof into a complete work of art, composed of elegance, beauty and modernity.

It is sunny on the last day of September on the Rive Gauche in Paris. In the early afternoon, there is little in front of the Palais des Beaux-Arts to suggest that in the evening this will be the venue for the fashion show of the Talbot Runhof collection “Flowers never fail you”, one of the highlights of Paris Fashion Week Spring/Summer 2018. Just like last season, La Biosthétique Paris is once again the hair styling partner for this important show of the designer duo from Munich.

As the autumn sun slowly begins to set above the fashion capital, and the buildings on the other bank cast their shadows across the Seine, the first photographers take their places in front of the main entrance. A few fans are readying their mobile phones in hopes of perhaps catching sight of an international top model sneaking into the building. Now and then, an official Fashion Week shuttle drives past the main entrance of the historic building on Rue Bonaparte, which is also home to the famous École nationale supérieure des beaux-arts de Paris. One of the world’s most renowned higher education institutes for the fine arts.

Nobody guesses what is already going on behind the scenes of Salle Melpolmène. La Biosthétique International Creative Director Alexander Dinter, who developed the hair look exclusively for Talbot Runhof. The look continues the story of “Flowers never fail you” in the form of hair styling, and his team of the best stylists from La Biosthétique salons worldwide, are already rushing around in the hectic of the last few hours before a Fashion Week show. Although they’re surrounded by the typical Fashion Week backstage atmosphere, the La Biosthétique team remains calm and focused. They are from Germany, the USA, Canada and Australia, and a few other countries. Wherever the world’s best designers present their creations is where the best stylists are also needed.

Alexander Dinter’s goal: The hairstyle as the perfect complement of the collection

Whether television teams are running through the narrow high halls, countless photographers are trying to capture the perfect styling moment or Christiane Arp, Editor-in-Chief of VOGUE Germany is honouring designers Johnny Talbot and Adrian Runhof with a short backstage visit, Alexander Dinter’s team has a single goal: The perfect style for every model, a harmonious fit with their outfits from the flowery new Spring/Summer collection of Talbot Runhof, inspired by 1970s coolness and flower power. A collection only becomes a complete work of art on the runway if the hairstyling creations symbiotically emphasise its philosophy. Created for this one evening of the runway show. But milestones are memorable, and this also goes for hairstyles.

Flowers never fail you – Neither does beautiful hair

“Today’s hair texture is super light and undone. We didn’t want it to be retro, but we wanted to gather inspiration from the 1970s to create something new. An asymmetric hairstyle because of its parting and strategically placed waves on the top hair, which features natural movement on the catwalk. Both modern and contemporary. Spray Beach Effect Styling Spray into the whole hair, and then apply Fixateur Mousse to the roots of the sectioned off side. Make sure you leave out the front contour. Shortly before the model goes on the catwalk, we finished the hair by spraying Powder Spray directly into the loose hair from below. This creates volume in the lengths. If needed, you can support the look by applying some Cream Clay to the parting”. 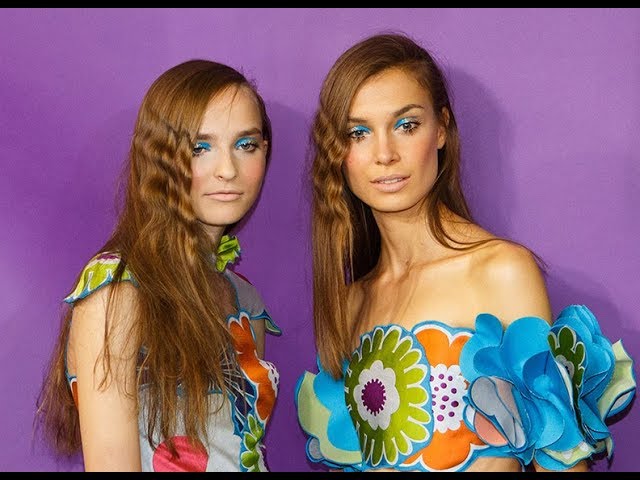 The autumn of stars and starlets in Paris

The services of the La Biosthétique styling experts really paid off. They are also stars of the fashion and beauty business despite being less in the spotlight than the designers and top models of Fashion Week. This autumn the crème de la crème of fashion once again flocked to Paris, the city of love, which turns into the city of fashion twice a year. At Talbot Runhof there was also a very young, very modern clique of interesting stars and starlets whom one could undeniably dub the digital avant-garde of the fashion world. The front row was occupied by guests invited by the designers and La Biosthétique such as Julia and Sylvia Haghjoo, Milena Karl, Paulina and Viktoria Swarowski, Pauline Baly, Marie von den Benken, Mandy Bork, Jiawa Liu, Desiree and Jennifer Selmanovic, Anastasia Bresciani, Paulina Rita Saady, Meagan Faye, Palina Kozyrava and Hannah Romao, some of the most influential opinion makers in the fashion world. They updated their more than 2,500,000 followers in real time with live stories and numerous posts with the hashtag #talbotrunhof.

When the cheering of the crowd has slowly died down, the designers are still answering the questions of the international press and outside the Palais people are taking their final selfies, the La Biosthétique team can gradually wind down. A day full of challenges in the usual hectic of Fashion Week is coming to an end – but everyone feels that it was once again worthwhile. The next day the international fashion press will describe the new collection as “weightless” and the garments as outfits “in which you can truly banish any sense of world weariness”. The hairstyles created today by the La Biosthétique team of Alexander Dinter have also contributed to this.

We are already looking forward to further shows in Paris and of course to the next collection of Talbot Runhof. Because one thing’s for sure in the fashion world: next season is just around the corner.